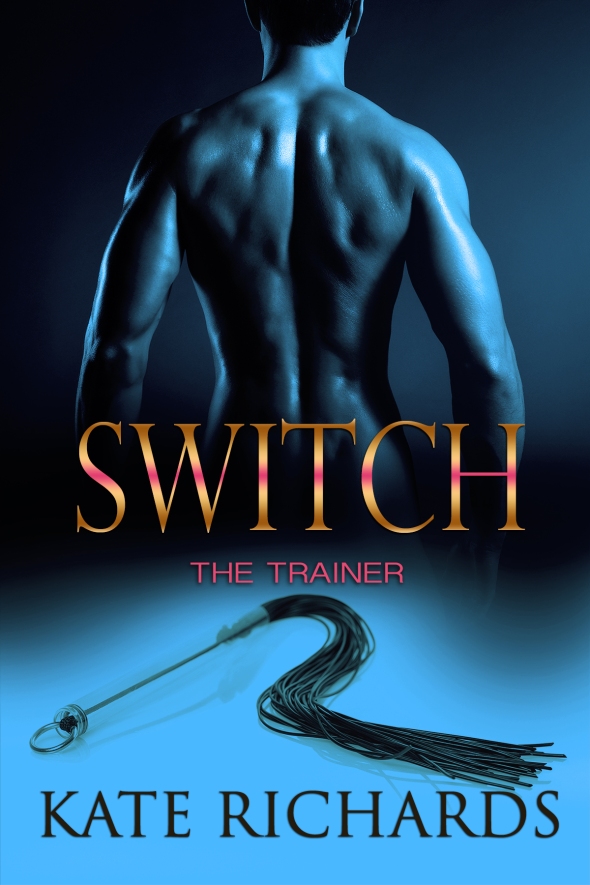 “Not so bad, was it?” Once again he rubbed her buttocks. Soothing the heat left by the flat of his hand. “Now, we will go to the bare skin, but first I want Rick to make his first decision.” He stopped stroking, but left his palm resting on her ass. “Go to the closet and pick out an implement. I suggest a paddle, but whatever looks good to you.”
Rick moved through her field of vision and disappeared again, while her anxiety rose. Her husband, who hadn’t even laid a hand on her backside, wouldn’t pick anything too crazy, would he? Of course, crazy was all in the eye of the beholder…or the bottom of the spankee.
“A whisk?”
A chuckle rumbled from the Trainer, irritating her beyond all reason, and she struggled to sit up, to get off the bastard’s lap. He dropped his arm over the small of her back, pinning her in place. “Some people have eclectic taste. See anything you like, Rick?” “I think so, yes.” She braced her upper body on her left palm raising her head and straining to see. What did he have from the cabinet of horrors? Esme let her eyes drift closed. Whatever would be would be.
A loud thump and they flew open again.
“Sorry, clumsy me.” What had he dropped? A bowling ball? The rock-hard thighs under her belly vibrated with the Trainer’s humor. She didn’t share his amusement in the situation. Of course his fanny wasn’t sticking up in the air, ready to be a target—again. Would anyone dare to give him a taste of his own medicine?
Perhaps this whole domestic discipline thing had gotten out of hand. The humiliation clause in their agreement hadn’t included a group guffaw while her butt caught cold.
“Ohhh.” The Trainer’s warm palm circled her cheeks again, one then the other, rhythmic and sensual. And created a whole other problem. Until now, she’d had zero reaction to his touch. Something had changed; the very thought of a paddle or flogger in her husband’s hand had triggered a reaction. Although it wasn’t him touching her, somehow the on switch had been flicked to her libido. Every inch of exposed skin was a tiny erogenous zone and his smooth palm swept from one to the next, lighting her on fire. “I don’t know—I’m not sure….”
“Rick, have you made your selection? I’m keeping your wife warm.”
Hot, he is keeping your wife hot, and you may not like that.
Rick’s white athletic shoes returned to her view. “Keeping her…warm?”
Well, gee, Rick, thanks for noticing another man is rubbing my bare ass. Just please don’t notice how turned on I’m getting. At least until she could think it through and decide whether she was becoming a slut who didn’t care whose hands were on her. She blew out a shuddering breath. Was it more distressing when she hadn’t reacted or now that she had?

The As Natural As Breathing Tour!

Thanks Kate for hosting the As Natural As Breathing Book Blog Tour today!

Yesterday if you caught my post over on Renee Rose’s blog, you got to know Logan. (If you missed it, you can find the link here.) Today I am introducing you to our other hero Christian. And don’t forget to read all the way through…there is a giveaway you can enter for gift certificates or books!

Christian is twenty-six, just returned home from serving in the military where he was almost murdered for being gay. Scarred from the grenade that exploded near his barracks and with a severe loss of most of the use of his left leg, he never expects to be happy again. And then he meets Logan who makes him laugh, feel joy, and introduces him to things he never expected. Falling in love with Logan ended up being the easiest thing possible for him. Finding out that Logan loved to spank? The fulfillment of a fantasy he had never revealed to anyone before.

In this snippet, Christian and Logan are on their second date and Christian has initiated their kiss.

This was nothing like kissing girls. Kissing Kelli paled in comparison to kissing this strong man. Usually he had to be the one who initiated a French kiss and Kelli accepted it, but never seemed to enjoy it. Logan seemed to enjoy taking control, but when Christian elected to put up a little resistance by using his tongue to stop Logan from entering his mouth too far, the most amazing sound came out of his chest. It was a deep rumble that made Christian’s cock so hard he wished he could unzip his pants and let it out.

The sound broke all resistance and Christian stopped trying. As his date’s tongue investigated every inch of his mouth, he found himself running his fingers through Logan’s hair. It was so soft and thick. He hoped he never cut it. Logan’s left hand still held the back of his neck while his tongue plundered Christian’s mouth, but his right hand began to stroke down Christian’s chest until it covered his cock, which was straining to be released.

“Fuck,” Logan moaned, pulling his mouth away. “Can I help?” he asked huskily, rubbing lightly over the bulge.

Book Description:
As Natural As Breathing

For Christian Darringer, life isn’t worth living. Just back from the Middle East; scarred and with permanent damage to one leg, he does not think anyone will want him for anything. Meeting a gorgeous man he finds himself thinking about constantly is not in his plans. Pulled toward the startling younger man with striking blue eyes, he begins to question a lot of things – especially his sexuality. Not one to hide from a challenge, he plunges ahead only to find himself more than just attracted to Logan who is full of life and joy, he finds himself head over heels in love.

Logan Mannette has almost everything he ever wanted: loving parents, happiness, friends and security. The only thing missing is finding the love of his life, a love that is just like his parents’. When he meets Christian at a party, everything changes. Instantly attracted, he does his best to help this sad man and quickly finds himself feeling more than he has ever felt before. Raised in a domestic discipline household, he holds that ideal as what he wants but his interest in spanking became a fetish and when Christian admits that he wants to be spanked, Logan believes he might have found the perfect man.

Just as everything begins for them, Christian’s past intercedes and one of his brothers makes waves about him dating a man. If it weren’t for Logan’s support, he might fold; but with the love of one amazing man, Christian finds that living his life rather than just existing is as natural as breathing.

You can find As Natural As Breathing at:
Amazon
Amazon UK
Barnes & Noble

Tune in tomorrow to get the URL for the next stop on the As Natural As Breathing Book Blog Tour. Now, get your entry for my giveaway:
a Rafflecopter giveaway

Happy Birthday to Ella Jade! Instead of all the presents going to Ms. Jade, she’s decided to celebrate with 107 other bloggers (at last count) and all the presents are for you, the readers! For a full list of participants click here There are prizes galore so be sure to visit everyone and enter to win! And as a grand prize…a winner’s choice $100 gift card for either Amazon or Barnes & Noble! As to my little blog, I will offer a copy of It’s Just Love, my Beachwalk Press recent release. See below for how to win. It all starts Friday, August 9th and runs through the 11th.

All this talk of birthdays has me thinking of significant ages. I’m older than Ella so I have more birthdays to look back on. I dreaded 40 and that was the year I discovered the true purpose of the Internet. I met my husband online less than a year after that…and developed a Canasta addiction that gave me many hours of pleasure and new friends I still hang out with. I met DeeDee my original Canasta partner just this year at a writer’s conference in Cincinnati.

Which leads me to the next significant age…50. Yep, done that one, too. With 40 being such a winner (not whiner! I stopped whining right after the birthday) I was actually excited to see what 50 would bring and it was the year I got published for the very first time. Grandma Moses, I know, but I was still young enough to hop up with my cane and click my granny shoes together. But…it makes me think. Sixty is pretty far off still, but I’m not afraid of it. I am ready to see what it brings.

So, Miss Ella Jade, Happy Birthday, a significant one and one I hope will be the best you’ve had, so far!

Share a happy birthday memory and I’ll randomly select one winner for a copy of It’s Just Love. Good luck with all the many stops and prize drawings…and be sure to with Ella a happy birthday. After all, she’s the founder of the feast.

Coral Nixie is living her dreams. Her cottage is blocks from her beloved beach and a haven for those seeking answers for their relationship problems.. And so what if her own love life is non-existent. Helping others and surfing should be enough for anyone, even a virgin, slightly lonely witch.
Gage Middleton is a successful author and relationship counsellor. His “Factors” can indicate the success of any relationship, and he’s about to propose to his own perfect match. Until Ms. Perfect dumps him and he has to go on TV and defend his theories against a ridiculous hippy witch with the most beautiful eyes.
On a dare from the host, the two set out to follow another couple on their first three dates. They have nothing in common…and neither do the man and woman they follow. And they hadn’t counted on their own attraction. Can they let go of their own stubborn beliefs and accept there’s nothing to prove. It’s Just Love.