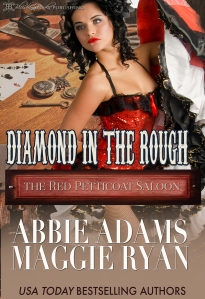 Marshal Tripp Houston makes his own luck and doesn’t believe in chance—until Lady Luck smiles up at him with her cat-like green eyes. If it’s the last thing he does, Tripp is dead set on bringing down the vile Shotgun Slick Gang. It’s been said that the outlaws have a woman traveling with them. Tripp is almost certain that woman is Diamond, especially with her sneaking around and asking lots of questions. But, if he’s wrong, and she is the innocent she proclaims, then once every last slimy one of the gang are swinging from a tree, he plans to hand in his tin star and settle down with the little card-dealing gem who ran away with not only his horse, but his heart as well. After all, he knows just how to tame a feisty gem.

Diamond won’t take no for an answer, especially when it comes to those bossy men of Culpepper Cove standing in the way of finding her sister Damaris—not even when it means she will end up with a hot, achy backside over the knee of one very stubborn lawman. The trail she’d been following for months led her to Culpepper Cove and The Red Petticoat Saloon where she entertains the men while dealing blackjack and sifting through their conversations for information that will help her find Damaris—but she doesn’t go upstairs. That is until the night she makes a silly bet, (it had worked for Jewel, hadn’t it?) and ends up falling for the man who tried her patience at every turn. Will the bet cost more than her virginity? She hadn’t wagered her heart, but she may very well have lost it to him already.

About The Red Petticoat series:

The Red Petticoat Saloon series is a collection of books written by #1 and USA Today bestselling authors. Each book tells the unique story of a different woman, ‘a gem’, who comes to the saloon to find a safe haven and discovers they become part of a family. Recurring characters appear in each book to allow readers a continuity as they learn about the women who have learned to bend but have not broken under the harshness that life has to offer. It is a series where strong, loving men find not only entertainment at the saloon but the special women who reside under its roof.

Wow! Hasn’t this been exciting? I don’t know about you but I’ve always been a fan of old westerns and more than half in love with dusty old cowboys—and the sterner, the better. John Wayne definitely fueled many of my girlhood daydreams, alongside Sam Elliot and Clint Eastwood. Now, we have Gabe, John, Jeb, Bo and the rest of those dominant men of Culpepper Cove. I hope you’ll find Tripp and Diamond’s story to be fuel for some of your own daydreams.

It didn’t take long for Diamond to start telling me her story. When I heard about The Red Petticoat Saloon Series, I wasn’t sure that I could participate, but Diamond is a woman who won’t be ignored. She demanded her place in the series and she got it. Although, I have to say a big, giant thank you to Maggie Ryan, my co-author.

Sometimes, no matter how vividly the characters talk to you, life happens and you just don’t get a chance to tell their stories. This was the case with my story, Diamond in the Rough. If, not for Maggie, Tripp and Diamond would still be buried on my hard drive with a slew of other unfinished works.

Thank you, Maggie. As always, you make me look good—and I hope you already know I’d be lost without you. Thank you for helping bring these amazing characters to life.

And to our readers, I hope you will fall in love with Culpepper Cover and the Red Petticoat Saloon family.

As soon as Gabe was gone she let loose of the stranger. “Marshal is it? Why didn’t you tell me you were the law instead of scaring me half to death? What is your game, Mister—what do you want with me?” Despite the anger she felt toward the man, when she looked into his eyes again and he spoke, heat pooled low in her tummy.
“No game. Like I said, I just want to keep you out of the hands of some outlaw, with vile intentions. But, honey, if you want to play games, I’d be delighted. I’ll even let you choose—but be warned, I never lose.” He tugged on one of her curls again.
She shoved his hand away and then stepped aside when she realized she had the space to do so. Before she stomped back into the saloon, she leveled on him. “Well, that makes two of us, Marshal. But there are some things you should keep in mind. First, here, the house takes all ties. And second, the play doesn’t happen until you take your seat at the table; anything else is just talk. Many men can talk a good talk, but that’s it.” She spun on her heel to leave him, but he caught her arm and turned her back to face him.
“I’ll be seated at your table tomorrow night, ladybug, but I’ll be interested to see if you are able to do any sitting.” He let her go with a cocky wink and a husky chuckle.